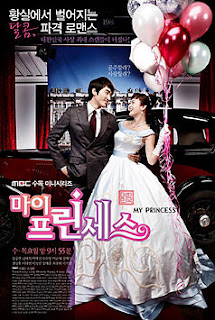 My Princess Cast and Characters : 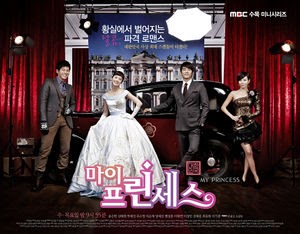 Lee Seol, an ordinary college student finds out that she's a princess and the great grand daughter of Joseon Dynasty last Emperor Emperor Sunjong. She does not want to believe that she's the princess because that would mean that her father is dead. She's holding on to his promise that he will come back for her. But later on in the series she accepted that she is the princess to clear out her fathers name and fell in love with Park Hae-young evethough they have conflicted interest ( he does not want to give up his inheritance for the restoration of the Imperial Family, while on lee seol's side, eventhough she does not want to be the princess but she has to go with the president in order to clear her father's name since she thinks that park hae-young does not have the power to do so since he was unable to put a stop of their videos on the internet and she was banned for leaving the country and had her passport confiscated when she agreed with him to flee the country and decline her position as the princess)

Park Hae-young, the grandson and heir of Daehan group was appointed to be Lee Seol's teacher on proper etiquette. He does not want Lee Seol to be the princess for he is oppose on restoring the Imperial Family since that would mean giving up his inheritance if the monarch is restored. He plot and pull some tricks on stopping her to be the princess but in the end fell for her and was the one who convinced her to be the princess of korea.

Oh Yoon-joo, The future daughter-in- law of the Daehan Group, the Daehan group's museum curator is the villain of the series. She would do things in her power to be the part of  Daehan Group. She was supposed to be Park Hae-Young's Fiancee but with the sudden apperance of the princess all her plans was distrupted. Upon learning that the President of Daehan group would give  all his properties back to the society if the imperial family is restored. That is not in accordance to her plans since she wants to be Park Hae-youngs wife but she wants to be a RICH man wife.

> series is ok
> light hearted. made me laugh. not too much dramatic. no dragging scene
>love Lee Seol's outfits, (the way she winks was cute! must learn that!)
>hated Oh Yoon-joo character!
>some lines we're too cheesy!! Especially when Park Hae-young likes her already!
> this series is already airing on ABS-cbn but I want to know the entire story and how it ends so i've been watching the series already.( just only ep5! but got impatient so watched  the final episode and my elder sis watched it with moi. haha)

I'll post the episodes and what happened in the episodes later! :)
Posted by missyphoebe at 5:13:00 PM No comments: