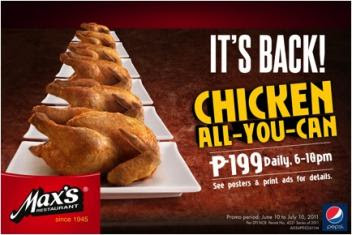 Sarap-to-the-bones fried chicken goes full-throttle this June as Max’s Restaurant announces the much-awaited Chicken-All-You-Can Promotion 2011. It’s time to work up the biggest appetite and make a beeline once again to the nearest Max’s Restaurant for an... unlimited serving of the Filipino’s favorite home-cooked fried chicken, from 6:00 pm to 10:00 pm daily. For only PhP 199, customers can bite into their favorite Max’s fried chicken, matched with an ice-cold glass of any Pepsi softdrink that can be upgraded to bottomless drink for only PhP28.
Diners can also watch out for a show-stopping promo activation performance by Max’s employees every 6:00 pm daily to signal the start of the promo. As an added treat to its customers, Max’s is also giving away free PhP 20 money coupons for every PhP200 spent during the Chicken-All-You-Can promotion.
A maximum of three accumulated coupons per transaction may be used to “purchase” any Max’s products within a year after issuance. “Chicken-All-You-Can fever has never really waned since its successful launch last year. We have received an overwhelming clamor for this unlimited chicken offering from our customers all over the Philippines. Now, Chicken-All-You-Can is definitely here – and it’s bigger and better,” said Bobby Simborio, Corporate Communications Officer for Max’s Group of Companies. Max’s is expecting the public’s excitement level to reach a fever pitch on June 10, the first day of the promo. To date, it holds the record for the biggest eat-all-you-can promotion ever launched by a single fast-casual dining restaurant in the Philippines. “For those who missed Max’s Chicken-All-You-Can promo last year, this is their chance to avail of Max’s biggest treat. Celebrate with your friends, family and barkada. Be sure not to miss it this year! Troop to your favorite Max’s Restaurant for the most exciting value-for-money promo from Max’s,” said Simborio. Await the tilaok signal and catch the Chicken-All-You-Can fever by visiting any Max’s Restaurant nationwide, from 6:00 pm to 10:00 pm daily. Promo runs from June 10 to July 10, 2011 only.
Lift off from http://www.maxschicken.com//index.php
Posted by missyphoebe at 3:50:00 PM 4 comments:

Email ThisBlogThis!Share to TwitterShare to FacebookShare to Pinterest
Labels: eat all you can chicken, max chicken all you can 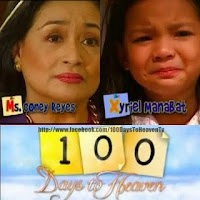 Local show that I am currently following

100 Days to Heaven is a Philippine fantasy children television series currently airing on ABS-CBN starring Xyriel Manabat and Coney Reyes. This is Coney Reyes first lead role after having already portrayed supporting roles in teleseryes such as Ysabella and Rubi. 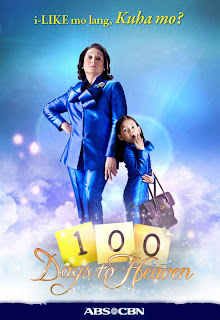 100 Days to Heaven tells a story of Anna, a strict boss of The Toy Company (portrayed by Coney Reyes). Due to her bad past, she became a cold and unkind person. Employees of the company are afraid of her because of her strict and bossy attitude towards them and others. One evening, she was killed in a car accident and her soul went into a place in which there was nothing but white mist (it is unknown if she was in Heaven). She only heard the voice of God and the truth that she was dead. There, God gave her a chance to live her life again in 100 days in a form of a child (portrayed by Xyriel Manabat), found by Sophia (portrayed by Jodi Sta. Maria) and she later befriends Kevin (Louise Abuel). Her mission is to find the people that she had hurt and correct her wrong doings.  If her mission is successful, she'll go to heaven.

AS usual after May Bukas Pa, ABS-CBN have a Good show that is worth to watch by the whole family. The show may be a fantasy BUT it may happen for all we know, Divine miracle are bound to happen that we may not be aware of.

I like the show because you can really feel the characters plight and it seems real to me. Each episode shown would have a moral story to tell and I think the children would learn something from the show: forgiveness, be helpful to your neighbors, be kind and most of all the golden rule: One should treat others as one would like others to treat oneself.

Xyriel Manabat is really good! Her debut on Agua Bendita did really made her a star (which we all forgot that it should be starred by Andi Eigenmann :) she was SO GOOD in portraying her roles that her appearance was extended! and then she had MOmay and then this show! More power to you Xyriel! But always be humble! If a Fan would ogled at you in the mall just smile (don't be like those star/s that are just starting to get known in the biz but when you bump into them in the mall and you ogled at them for awhile you would get a hard stare from HER. She's really a bendita on that glance. I am not the usual type that would get an autograph from a star or took a pic of them or with them BUT I am just human and I would like to take a GOOD look when I saw a personality/actor and would stop on my track and stare to: 1. if she/he really look like that as shown in the TV 2. Is she/he nice and would smile . It would be really a treat for us a lowly private citizen and bump into a down to earth actor ( and not be a bitch!)

Sorry guys, until now I really really hate that girl. She's really not a nice gal as what I heard about her. She really is bendita as in super duper agh

So, Xyriel, Hija wag kang tutulad sa ibang mga artista na akala mo mabait pero sa personal hindi maganda ang ugali. Maging mabait sa kapwa tao mo. I like you, so I hope that when I accidentally meet you on the road, I hope you'll be a nice young lady :) You are one of the reasons why I am watching the show. You are a child wonder! :)

Email ThisBlogThis!Share to TwitterShare to FacebookShare to Pinterest
Labels: 100 days to heaven, abs-cbn 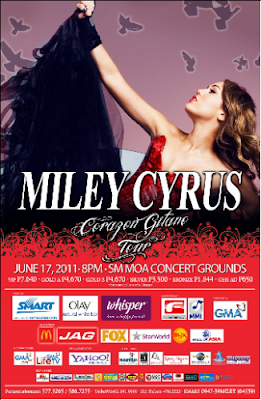 Hey, Peepz! Do you want to watch Miley Cyrus concert FOR FREE?? Click Here to read the info's :)

Watch for promo words on myx and eat bulaga, and when you buy 3 Gold B/ Silver/ Bronze or General Admission , simply say the promo words that you got from myx/eat bulaga at any TicketWorld outlets to get another ticket of the same section for free
Just Load 300 pesos then bring your receipt for pre-paid subscribers or show your latest paid bill for post paid subscribers to get 20% off the ticket price at all TicketWorld outlets.

Buy GOLD-B, SILVER, BRONZE and GENERAL ADMISSION using BDO MasterCard, Visa, and JCB at any ticketworld outlet to avail of 15% off discount.

buy 3 of any GOLD-B , SILVER, BRONZE and GENERAL ADMISSION tickets and get 1 for free, available for Over-the-counter or Internet purchase.
Posted by missyphoebe at 1:24:00 PM No comments:

Thanks to you Dodong that we had a break from the hot weather we are having and had rain for 2 days But we do not really need a storm. Storm would only bring devastation throughout the land. And until now the ghost of Ondoy is still haunting us. We, Filipino's are hospitable people BUT we do not want a repeat on that incident. Luckily you did not bring any calamity when you visited us. Hope the next one would be like you. Not too strong and only bring rains to us.

here is an update for Typhoon Dodong/Sarika

The Department of Education (DepEd) on Thursday, June 9, 2011, announced that classes are suspended in the primary, elementary and high school levels, public and private, in Metro Manila and other Luzon areas, as follows:
Bataan
Bulacan
Pampanga
Rizal
Laguna
Quezon
Batangas
Cavite
--Source: ANC
Posted by missyphoebe at 1:20:00 PM 1 comment: 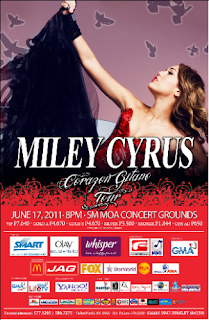 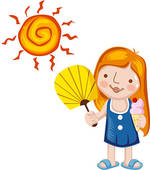 Can you feel the heat wave today? so, hot here in the metropolis, the temperature is 34 °C/ 93 °F, not the hottest temp we had but then again one would be bothered by the weather we are having. we just need to drink lots of water and wear thin clothing to avoid having heat strokes. Maybe it would rain tomorrow? Hope so! :) I love rainy days :)
with a hot weather like this I miss going to the beach! I am so jealous of my sisters, niece and nephew. In the province when its summer time there would always be a time allotted for the whole kin to go to the beach. When I say KIN, yes, it means the whole clan :)
Here are some of the pics they had 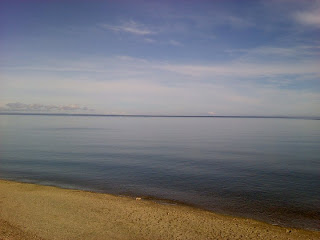 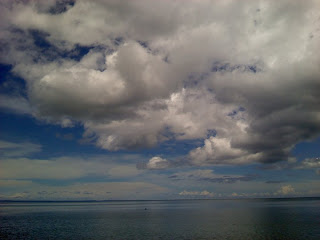 Beautiful and relaxing :)
Not like they have in bora but the resort is not too industrialize like some of the well known beaches in the country. It still had its own look like it had long ago.
Posted by missyphoebe at 2:23:00 PM No comments: