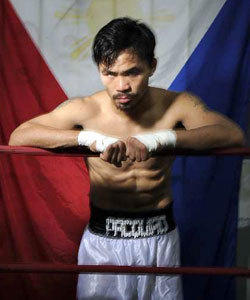 The influential Catholic church in the Philippines had asked boxing superstar Manny Pacquiao to follow in the footsteps of NFL hero Tim Tebow and become a "bible ambassador".

Bishop Pablo Virgilio David, who presides over the Catholic Bishops' Conference of the Philippines' (CBCP) bible ministry, said church leaders had approached Pacquiao with the idea, but received no feedback from the 32-year-old fighter.

"We asked him to partner with us in promoting the reading of the Bible among Catholics," David told reporters.

"We told him: 'You would be a big help to us brother Manny', but he has not pledged his partnership yet."

He said Pacquiao could follow the example of the Philippine-born National Football League star Tebow, a devout Christian dubbed by some in the press as "God's quarterback."

"Tim Tebow became very popular by promoting the word of God," David said. "Some have referred to Manny Pacquiao as the Tim Tebow of the Philippines."

Tebow, born in Manila in 1987 to a Baptist missionary couple, has emerged as America's hottest football star with his come-from-behind heroics for the Broncos.

Tebow has been very vocal about his Christianity and recently pledged to help fund a $3 million hospital in the southern Philippines.

Pacquiao is regarded as one of the greatest boxers in history, amassing a 54-3 win-loss record with two drawn bouts. He holds a record eight world titles in as many weight divisions.

Pacquiao, who is also a politician and recently elected to the Philippines' lower house of parliament, often cites God as the source of his success, and wears a rosary around his neck before and after his fights.

But the ultra-rich sportsman has not escaped intrigue, and reports of him womanising and gambling have become rich tabloid fodder.

In an interview with Philippine TV station ABS-CBN this month, Pacquiao said he had recently renewed his faith and given up vices following an "encounter with God" during a dream.

In the dream, Pacquiao said he found himself in a forest, where a bright light shone, believed to be God, asking the fighter why he was veering away from Him.

"I woke up crying. I remember I was crying in my dream and when I touched my pillow, it was wet," he said.

"If I had died last year or in the last two years, I'm sure I would have gone straight to hell. My faith in Him was there, 100 percent, but behind it, after prayers, I would still do evil things."

Pacquiao said he now immersed himself in Bible study and spent more time when not in training with wife Jinkee and his four children, according to ABS-CBN.

----------
I don't know why they would think  Manny Pacquiao would be suited for that position. Boxing is a form of gambling, right? So, why make him the bible ambassador? Or maybe the church would just like him to be their poster boy?

I don't like to see actors, politicians and even TV hosts be seen on their charity works. If they are really doing it for charity then do it without making it into a news, do it even if there's no camera around. They are just making it all a sham!

Every time that  Manny Pacquiao  is on the ring I admire him whenever he prays before and after the game BUT on this matter I simply do not agree for him to be the bible ambassador. He and the church would just muck it up. They should just both acknowledge that yes, Pacquiao is religious, he loves GOD and he believes in him but that should just stop there.

If he is religious and he wants to change for the better then good for him. Just do it in silence and not on the limelight. It's just not too sincere if he does it in front of the camera.
Posted by missyphoebe at 11:07:00 PM No comments:

After a few days of watching the trial I got bored by it! The only time that made me awake was when Senator Santiago got mad at the prosecutors because they are not ready for the trial. After that it went dull again. Senator Miriam is one of my favorite senators because she is a strong woman and she would say whatever she like to say (and her pick up lines are the best! made me laugh). She did say she needs anger management and I hope she would learn to reel in her emotions because she has hypertension. Whenever I watch the trial, its not "who" would be the witness or what would happen today BUT the one thing that I would ask myself is -- is Senator Miriam Santiago in today? :) I just find the trial MORE interesting when she is there. :)

I always wait for Senator Lapid's turn to question the witness. He asks simple questions and it made me think that it may sound simple to some people and laugh it off, BUT we should all be reminded that some people may also want to know what he is asking.

This trial is too dragging! It's like I am watching a soap opera that has the same lines and it's just too much to take in! It's becoming more of a trial by publicity! After the trial, senators would be interviewed by reporters and highlights of the trial would be on the news. It's just that I am having enough of the trial.

I think they should take a week off. Give the prosecutors more time to gather more evidences to acquit Chief Justice Corona, and most of all to study and be more prepared during the trial.