"NO Other Woman" Review 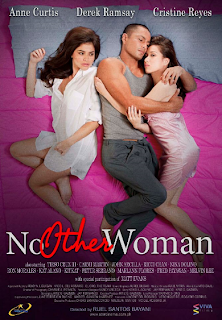 I was supposed to write about this a week ago but have no idea why I put it off for days. I was busy with inane things. I was one of the viewers who went to the cinema when it was on its first week. I watched it with my younger sister, cousin and the yaya of my nephew and we watched it at the last full show of the day. It was Friday and it was free seating at that time. When we were in line we we're told that it was a standing room already 'coz the house is full but we went in nevertheless. We are there already so we just opted to sit at the stairs. It was a first for me :)

Why did we watched it? Well, I love Anne Curtis! I think she is such a nice person and so would want to support her and the plot made me curious. Anne Curtis, played the role of the other woman on this film.

The film is a tale of a man's journey towards building a career and a family that he can competently provide for, but along the way, his ambition and reputation are tarnished by a single adulterous act. So, it mainly focus Derek's role in this film as the man who sinned and why he did it.

As of this posting, No Other Woman, breaks record and breached the P210 million mark in two weeks and still raking in at the box-office to be the number one. And I think it was worth it watching it. ^___^


I think everyone can relate to the story. In every marriage, one would really be tempted to taste a bit of a sin. Why? We are human after all. We are weak and we are all a sinners. The Husband, the wife and the other woman role fits perfectly and I think all of them made the film a success with the way they act their role!
I don't want to be a spoiler so I would not say anything on what happened or the plot of the story. I highly recommend that you should watch it. Kudos to the director! The movie was quite good. :)
Posted by missyphoebe at 11:57:00 AM

Email ThisBlogThis!Share to TwitterShare to FacebookShare to Pinterest
Labels: filipino movie, movie review, no other woman