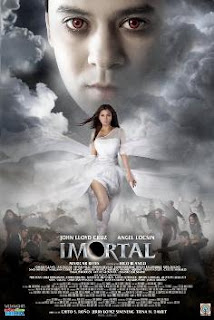 Two more days and IMORTAL would end. How sad. But it's at relief! hehe. It would be a bit tiring to have a long TV series. Its an improvement for the soap operas and tv series we have now. Years ago it would run for a long time and the scenes are dragging already and we the viewers would complain to please just end it already! (remember Mara-Clara?? It took years for them to know the real heiress and the evidence is just under their nose! hehe)

It's sad to say goodbye to Imortal and a lot of people would agree that we have a love-hate relationship with all the characters (love lia, mateo and especially sam's character!)

Lia went to the apartment where Simon was attacked. She saw some pills scattered on the table. She suddenly had stomach pains and she fell down. She touched the blood on the floor and she saw simon on the floor and the attacker was standing over her. I don't know if she knows that the attacker was actually Lucas.
Mateo was chained in a pillar and being slash by a chain by Imelda (Francine Prieto) magnus came in and got the chain and slash Mateo too. Then the next scene he was put in a coffin. Magnus was heard saying that Lia would never find Mateo. (I was really surprised when I saw Lia wearing my dress!! I also have that! LOve it! But the boots she's wearing does not go well with the dress)

Lia had another dream with her daughter (a toddler is talking with Lia. I think she's a telepath since she's still a toddler and can't talk. hindi sya si Lam-ang! hehe). She told Lia that she should not fight them. Then she woke up and Lucille's group entered the compound.

Mateo and company meanwhile saved the people in the summit. Lydia (Nikki valdes) does some hypnotizing with the people, so that they won't remember what really happen. Mateo manage to wound Magnus but Sam called his attention that made Magnus run away from Mateo.

Mateo asked Sam if she's really an ally when it shows that her intention was to freed her father. Sam told him if that's really what he thinks of her? and she told him that on their investigation that Lucas may be involved with all the killings. Mateo does not believe her. She told him that Magnus have bitten Lucas and even Magnus was surprised that Lucas is still alive. Maybe he's a monster now. Mateo walks away from Sam and leave.

Sam called Lia and told her about the investigation. She'll go to the hospital again and spy on Lucas.

Mateo received a text that Lucille's on the compound and is about to attack. A group of Vampires put a chain around him and drive off in a van.

Lucille's band and Lia's company had a face-off but Lia told her side to put down their guns. She told Lucille that she believes that Lucille really loves the Wayas Clan and only looks for the good of the Clan. That's what her sentiments too. If she really cares for the Waya's, she wants her to show it. If she can stomach killing her defenseless clansmen. If she did that, that only proves who she really is and what's she stands for. Lucille told her men to retreat. She told Lia that the next time they will fight she will not retreat and Lia should fight back. Carlos agassi's group went back to Lia's when they received a text informing them that Lucille is there to attack and kill Lia.

The captain of Lucille's team told her that some of the team are now having doubts on where she stands and maybe she's now being swayed into Lia's camp. She told them that if they want to they can go back but she won't go with them. She does not kill those who does not have a will to fight.

Sam confronted Lucas. Lucas took off and she run after him. They end up in some run down theater. She told him that he will all be alone. He got mad at her and bit Sam. Sam run away. Her right arm was turning to look like Lucas.

She went to Lia and told her that she got bitten by Lucas. She does not want to be a monster. She took a gun from Vergara (Carlos A) , told Lia to tell Mateo that she will always love him (waahhhhhh!!!! true love really is so heratbreaking especially if it's one sided!) and lock herself inside a room. Lia's company was knocking and knocking and shouting for sam to open the door.( I thought that waya's are super strong so why don't they just barge in..knocked down the door??? really confuse. the writer did not think well in this scene. so lame! hays! ) Sam killed herself. (so sad! Sam was one of my favorite character. I hope Maricar would have some more project's in ABS. She sure can act)

They have some burial ceremony for Sam. She did not turn into dust (maybe due to her being bitten by Lucas she's now not a purely vampire. Maybe that's the reason why she's not like the vampires who died who turn into dust. That's just a theory!)

Magnus and IMelda saw the burial of sam and while they are cremating her corpse Magnus uttered that he will avenge Sam's death ( I think he blames Mateo because on the teaser last night he was with Lucas and they are planning to kill Lia and Mateo and after that he can turn him (Magnus) like Lucas kind).

Mateo was trying to get out of the coffin but his hand we're being burned.

Let's watch out what will happen tonight!
Posted by missyphoebe at 5:48:00 PM